Thanks and see you next time!

We hope you are well.

We apologise for our silence in the past two weeks. On the last day of the CUMECS cruise we were very busy with preparing for disembarkation, making data back ups and clearing the laboratories. And after disembarkation, some of the cruise participants headed back home whereas others attended workshops and conferences across .

We are very happy with the CUMECS cruise and we think it was a great success. Our young team (with average age of 32 years) worked really well. We managed to obtain more data than we hoped for, and we discovered some really interesting features along the Malta-Sicily Escarpment.

The CUMECS cruise may be over, but our work is not. The next phase of our project will involve processing and analysing the acoustic and sedimentological data acquired during the expedition. We will generate detailed 3D models of the seafloor and 2D images of the sub-seafloor to understand the evolution of the Malta-Sicily Escarpment in the past. We will also use these data to test predictive habitat mapping techniques. We plan to investigate the sediment cores in the laboratory to determine the nature, origin, age and frequency of landslides and flows within the canyons. And, finally, we will watch the ROV footage again to identify and map benthic habitats and biota in detail.

When all the analyses are completed, we will produce articles that will be reviewed by scientific experts in the field and published in international scientific journals. We also plan to present the results of our study at a number of international conferences.

And for the general public, we will produce a documentary that will be uploaded on YouTube and shown at secondary schools.

At this point, we would like to particularly thank the Eurofleets project for making this research cruise possible, and the captain and crew of the R/V Urania, who were so professional, efficient and fun to work with.

And we would also like to thank you for following us from all over the world, and we hope that you can join us on our next adventure! 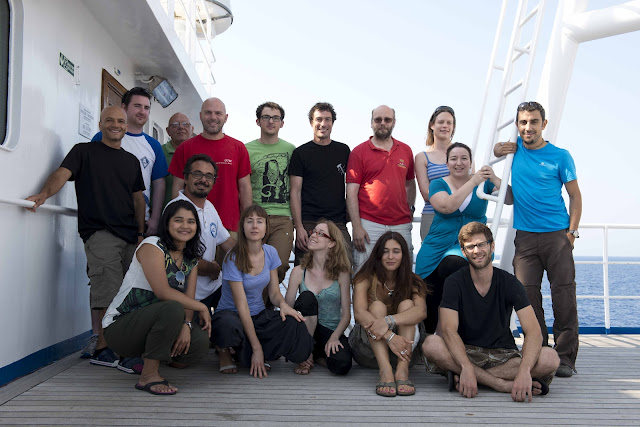 The CUMECS cruise is almost coming to an end, but a lot of new data is still coming in!! We can't stop!:)

This morning we deployed a high resolution seismic source called Sparker, and at the same time we were shooting the Chirp, here you have one of the profiles collected crossing a massive landslide. This profile is like a x-ray image that shows the sub-seafloor and displays the main geological features forming that landslide.

After the seismic operations we started another ROV transect, between 300-500 m water depth. Many observations were done with the most important being the surprising presence of two other sharks, an octopus, fish and a really angry squat lobster which attacked our poor Pollux (ROV). Unfortunately we found as well a lot of rubbish, and fishing lines abandoned, which suppose a big danger for marine organisms. 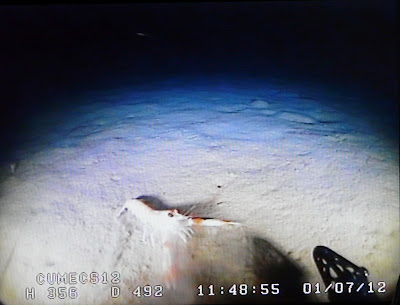 We used an ADCP (Acoustic Doppler Current Profiler) to measure the oceanographic currents of the area. We have also done a dredge to sample the upper part of seafloor and we have collected fragments of coral and rocks. 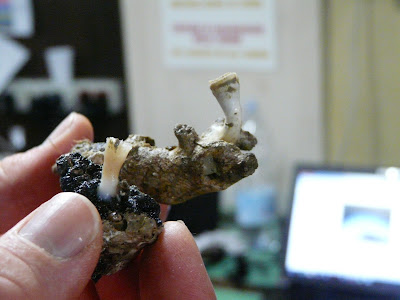 Some scientists were watching the football match while others were doing the shift, of course!!!! The atmosphere is really good and all the Spanish scientists are still on board!:)
Thanks to Dario, we all ate an amazing Birthday cake! Happy Birthday Dario!

And here is a video of the CUMECS expedition prepared by our friends Fabio and Vittorio from CNR:

Email ThisBlogThis!Share to TwitterShare to FacebookShare to Pinterest
This is our third day at sea and we are happy because we have good weather and our study area across the Malta-Sicily Escarpment has been almost completely surveyed with multibeam. The most interesting feature discovered so far is a large submarine landslide, the area of which is as large as 5000 football pitches!

We also continued getting samples from the seafloor, and today we managed to obtain six sediment cores from the submarine landslide and a nearby channel. We have been a bit unlucky with the seismic acquisition system, however, because the high temperatures are affecting the power supply; our helpful technicians are trying to solve the problem. 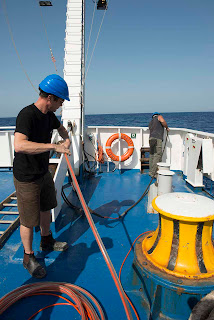 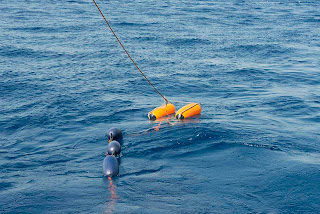 But we are happy for another reason! Our chief engineer Pietro has invited us to some his home-made limoncello...oh my God!!!! And we had a super lunch and dinner, with lots of fresh fish...rice with calamari, fried cod, shrimps, octopus and more!!! This is just a floating research restaurant!!!!

And the people on board the RV Urania are just start trembling for the tomorrow's football match......because the crew and some scientists are Italian and also there are some Spanish onboard!

Today has been an amazing day, because we have successfully recovered three gravity cores of approximately 3 m length at 300, 500 and 600 m water depth.The selection of the coring locations was based on the recently acquired multibeam data from the Malta-Sicily Escarpment. We targeted an interesting small landslide within a larger landslide scar to understand its nature and age. While we were collecting the cores we were paid a visit by a friendly shark. 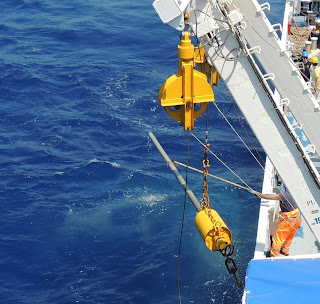 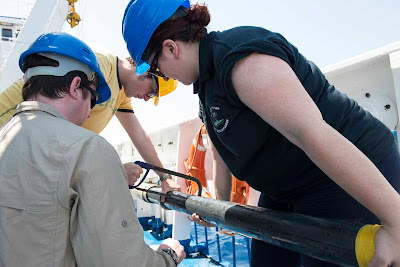 After coring operations we surveyed the steep sidewall of the landslide with the ROV. We carried out a 5 hour transect during which we discovered black coral communities, fishes, urchins and seapens!!! It was a nice surprise, especially when our friendly shark came back to say hello on camera!!!! 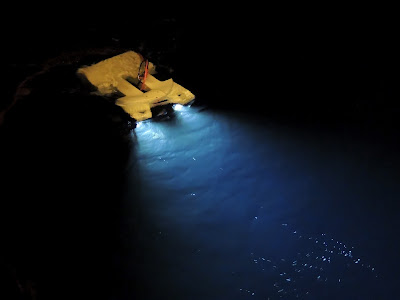 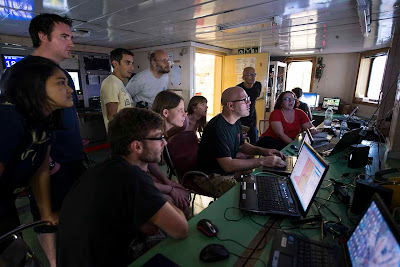 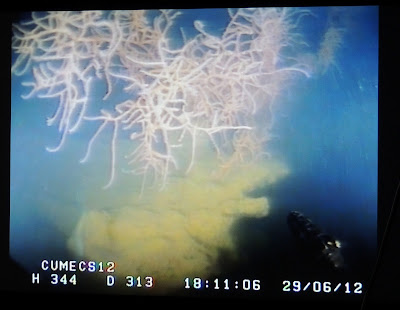 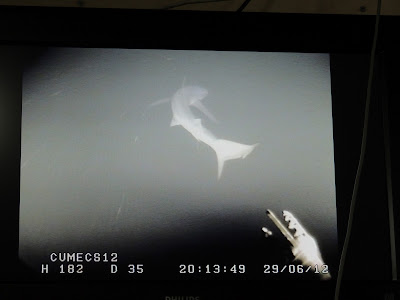